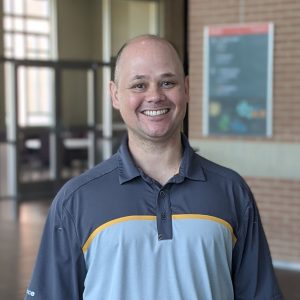 John is married to Sarah and has two children, Eli and Naomi. He is an enthusiast for disciple making, sports, business and food. These passions started as a kid in his hometown of Brownwood, Texas. He met Sarah at Texas A&M University and graduated with his BS and MS in accounting.

All throughout his early childhood, John heard the gospel from his dad and mom. Before following Christ, he tried to find his identity in sports and morality. In fifth grade at Lake Brownwood while attending a royal ambassador camp, he placed his faith in Christ and began to follow Jesus. He was baptized at Coggin Avenue Baptist Church. By God’s grace, he now identifies as a Christ follower. He is learning to love and follow Jesus in every area of his life.

In seventh grade, John began to sense a calling for ministry. Years later he realized that this calling was to be used in the context of business. In August of 2005, he started a career as a certified public accountant and plugged into MacArthur Blvd Baptist Church. At MBBC, he served as a community group director, youth group leader, deacon, trustee, finance committee member, and a leader in missions. In 2017, Sarah got a job transfer and his family moved to Twin Cities, Minnesota.

After moving to the Twin Cities, he launched a non-profit called the Kingdom Multiply Network. This network exists to help everyday people thrive in their calling to work while making disciples in their harvest field. He and others are asking the Lord to raise up 50 leaders focusing on the workplace and the college campus by year 2025. Through these leaders he anticipates that new disciple making movements will establish 200+ congregations sprouting from 25,000 good news conversations with the lost.

While living in Minnesota, John began to have a stronger desire to serve as a pastor in a local church. In January 2020, he went on staff as Pastor of Operations at The Heights Church in Richardson, Texas and helped the launch of the Canyon Creek neighborhood missional community group. After a few months, he began to sense a more specific calling to missions ministry. John and his family are excited to once again be part of the MBBC family focusing on missional engagement.